To Kevin, With Love

Tina and Walter Underwood’s hopes and dreams for their son, Kevin, were always the same as those for his brother, Michael: that he would have hobbies and interests he enjoys, like horseback-riding. He would also have friends and a community that supports him. Most of all, others would care for him and love him as much as they do. 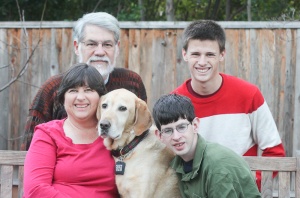 Weighing only 5.3 pounds at birth, Kevin faced a number of challenges due to a rare developmental disability and an autoimmune disease. Over the years, however, he developed his own unique and calm approach to life:

“Kevin has always been our Teeny Little Super Guy,” says Tina. “He doesn’t do something until he is absolutely ready. With perseverance and the best giggle ever, Kevin keeps trying until he  accomplishes what he wants.”

Throughout Kevin’s life, Tina and Walter worked with many professionals to help him become as independent as possible. They also practiced numerous daily living activities in hopes that Kevin would someday be able to live on his own.

But along with the Underwoods’ hard work and hopefulness, there was always an ever-present worry about Kevin’s future: Where could he possibly live, if not with his family?  Where would it be and what would it look like? How could they possibly afford it? Would he have friends? Most importantly, how do we find the right place for him?

While Kevin was finishing high school, the Underwoods investigated living options. They visited different homes and communities, looking for the right place for Kevin.  All the places were safe. Some were good, but none were a fit for Kevin. Tina shared, “The need for housing in the Bay Area is ever increasing and there aren’t many choices, much less great ones.”

The Right Place for Kevin 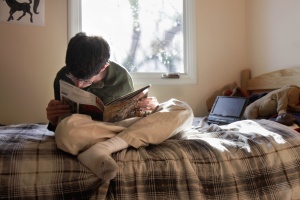 The Underwoods first heard about Life Services Alternatives at talks sponsored by the school district. Executive Director Dana Hooper spoke about LSA’s commitment to open five new residential care homes in five years for adults with developmental disabilities. As Dana described the supportive environment and individualized approach, it was clear that an LSA home would be a terrific place for Kevin.

So they scheduled a visit to LSA’s Cypress residence and were amazed to find that it was a warm and happy home! The staff were not only caring and supportive, but engaging and fun. And, they help the residents only when necessary so they gain independence. Tina and Walter knew this was the right place for Kevin.

One of the Cypress Guys

Kevin has lived at Cypress for nearly a year and the transition has been seamless. His housemates took him under their wings and helped him adjust to his new home. Kevin loves animals, especially dogs and horses, and his favorite thing in the world is to go horseback-riding. On his first weekend living at Cypress, all the guys went to see Cavalia – a horse lover’s dream!

The Cypress Guys (an affectionate LSA term) all joke with each other, sing Karaoke, work out at the gym, watch sports together and go on camping trips. Kevin is now just “one of the Cypress Guys.”

Today the Underwoods are feeling relieved and hopeful. They no longer worry. Kevin surprises his family constantly with his new skills; like doing his own laundry and using Facetime to connect with his brother. And thanks to the exercise program recommended by the LSA physical therapist, Kevin now has biceps. Looking back at her family’s journey, Tina is optimistic about the future:

“There are some kind and wonderful people in this world – doctors, teachers, job coaches, friends. People who did the right thing at the right time for us. LSA is one of those wonderful places.”

Donate in any amount to support adults with developmental disabilities. Every dollar helps us provide our residents with the best life possible.

Stay updated on the latest LSA news and progress. Sign up for our newsletter and get connected!